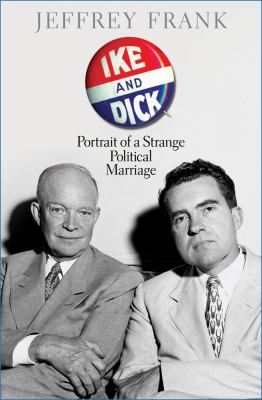 Truro Library Book Group
The November selection is Ike and Dick : Portrait of a Strange Political Marriage by Jeffrey Frank

The Book group is now meeting inside (or outside when possible) the Library. If you would like to join virtually, please email Maggie to receive an Zoom invite.

Novelist and former New Yorker and Washington Post editor Frank (Trudy Hopedale, 2007, etc.) delves into political biography, focusing on the complicated relationship between President Dwight Eisenhower and his two-term vice president, Richard Nixon. Though both private men from similar backgrounds, Eisenhower and Nixon differed in many ways. When Eisenhower chose Nixon, then a senator from California, as his running mate in 1952, it seemed to be more the choice of his advisers and one of political expediency, as a way to satisfy the right wing of the Republican Party. As Frank demonstrates, the pair’s long relationship was marked by “a fluctuating, unspoken level of discomfort,” and they were never close (even after Eisenhower’s grandson and Nixon’s daughter married in 1968). Frank points out how the eager Nixon felt “like a junior officer” in the presence of the war-hero president, who disliked Nixon personally and rarely enthusiastically supported him. Indeed, the author portrays Nixon’s vice presidency as often frustrating and stressful. In one engaging section, Frank describes how Eisenhower seriously considered removing Nixon from the re-election ticket, but he expressed it to Nixon in an unclear and passive-aggressive fashion; meanwhile, the president’s health issues made a Nixon succession a real possibility on multiple occasions. Throughout, Frank highlights the major events of the Eisenhower presidency, the following presidential elections and beyond, filtering them effectively through the lens of the Eisenhower-Nixon dynamic. The author does a fine job delineating the complex personalities of both men, and he provides novelistic touches befitting his background. At one point, he describes the colorful political figure Clare Boothe Luce as “beautiful, charming, and slightly mad,” and, at another, he thoughtfully compares Nixon to an Anthony Trollope character. A well-researched and -written history that will satisfy both Eisenhower and Nixon aficionados.