Stephen Kendrick, co-author of Nine Days: The Race to Save Martin Luther King Jr.’s Life and Win the 1960 Election 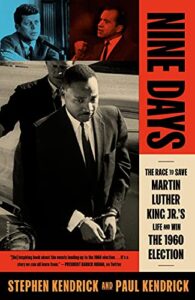 Stephen Kendrick speaks on his book Nine Days: the Race to Save the Life of Martin Luther King and Win the 1960 Election. Less than three weeks before the 1960 presidential election, 31-year-old Martin Luther King, Jr. was arrested at a sit-in at Rich’s Department Store in Atlanta. That day would lead to the first night King had ever spent in jail―and the time that King’s family most feared for his life. An earlier, minor traffic ticket served as a pretext for keeping King locked up, and later for a harrowing nighttime transfer to Reidsville, the notorious Georgia state prison where Black inmates worked on chain gangs overseen by violent white guards. While King’s imprisonment was decried as a moral scandal in some quarters and celebrated in others, for the two presidential candidates―John F. Kennedy and Richard Nixon―it was the ultimate October surprise: an emerging and controversial civil rights leader was languishing behind bars, and the two campaigns raced to decide whether, and how, to respond. America’s political landscape would be forever changed as a result. Stephen and Paul Kendrick’s Nine Days is a page-turner that tells the incredible story of what happened.

Co-sponsored with the Truro Meeting House