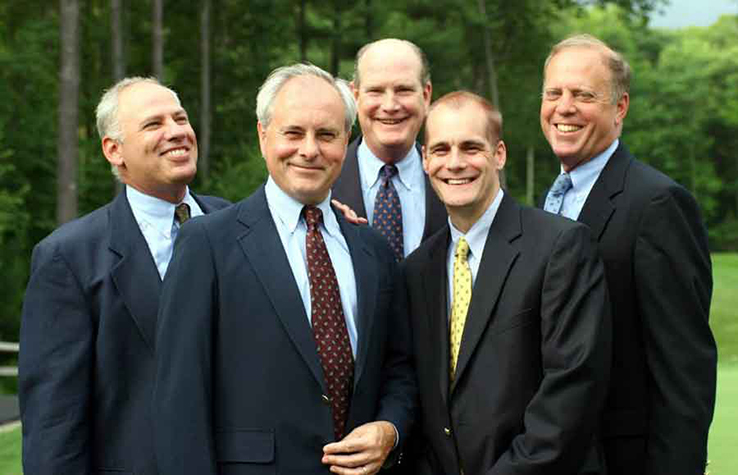 Peking and the Mystics—Vintage Acapella

One sunny day in the spring of 1973, a few Tufts University grads got together for lunch at a local Chinese eatery. The meal produced some remarkable harmony, and the rest, as they say, is history. More than four decades later, Peking and the Mystics is still running on all cylinders. The group, which includes three original guys, is comprised of five Tufts grads who were all members (in different years, with no overlap) of the university’s acclaimed singing group, the Beelzebubs. PATM has toured nationally and internationally (including trips to the Far East and South America), recorded three CDs, appeared on television and radio, and been featured in local and national print media. The group’s eclectic a cappella repertoire, with original PATM arrangements, incorporates swing, jazz, doo-wop, and pop music of every decade from the 1890s to the 2000s.

Gene Blake, tenor 2, has written 75 arrangements for the group. Gene studied music with the lead trumpet man for Les Brown and his Band of (you know). He and his family reside in Andover, Mass.

Andrew Cranin, low tenor, splits time between Cambridge and Brewster, Mass., dutifully following his wife between homes. Andrew performs in theater productions in Greater Boston and on Cape Cod, and has contributed several arrangements to PATM.

Chris Parker, bass, grew up on Boston’s south shore and now resides with his family in Ipswich, Massachusetts. Chris is an enthusiastic golfer, with aspirations for the Senior Tour.

David Pratt, tenor 1, is a life-long resident of Massachusetts who grew up in Longmeadow and now lives in Wellesley. Dave, enjoys time with his family, hiking, coaching youth soccer, and making and eating quiet dinners with his wife.

Tim Vaill, baritone, is a founding member of the Tufts Beelzebubs, the a cappella group in which the members of PATM sang during their undergraduate college years. He also helped launch Peking and the Mystics in 1973. A native of Connecticut, Tim and his wife reside in Andover, Massachusetts.