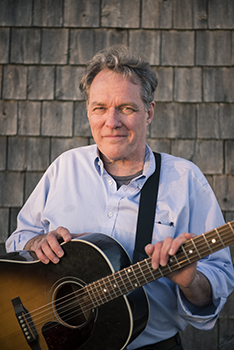 Songwriter and multi-instrumentalist Joe Flood has traveled a long musical road.  He worked the streets of Paris with the Lost Wandering Blues and Jazz Band, whose alumni include Madeleine Peyroux; written songs with Levon Helm of The Band; won a Gold Record for his work with Blues Traveler; and had on stage and studio encounters with such giants of American music as Pinetop Perkins, Dr. John, Allen Toussaint, and John Sebastian.

He has released five albums under his own name and been featured prominently on several albums; had his song sung on the Conan O’Brien Show by country singer Laura Cantrell; and had the thrill of hearing legendary jazz great Doc Cheatham soloing on a recording of another.

“A Troubadour’s Tour of Historic Nantucket,” a collection of ten songs inspired by historic sites on Nantucket island, was released by the Nantucket Historical Association on June 30, 2017 with a concert at the Nantucket Whaling Museum.

Another new release, “All Roads Lead to the Blues,” new original songs exploring blues forms and themes and their connections to Afro-Cuban, gospel, rock ’n’ roll, and country music, will be released within the year.