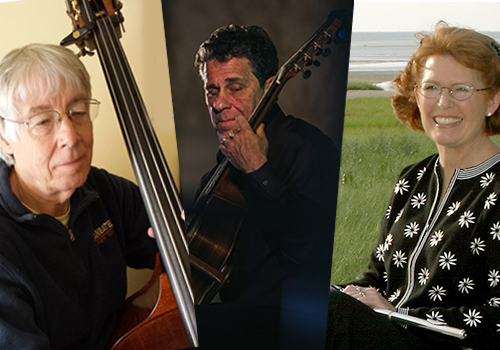 Experience lively jazz with three musicians whose backgrounds and experience range from roadhouse to the concert hall, who believe that music lies beyond category and genre, and for whom quality of sound takes precedence, which is why the band uses minimal amplification in live performance. All their music is composed or arranged by Fred and Michael. The result is not merely the coupling of Bach with Brazilian rhythms, or Gershwin with gut-bucket blues, or Debussy with a groove, but alchemy that refashions a broad array of musical influences into something entirely new.

Peggy Gerber, Flute, began her study of flute in Canton, Ohio at the age of nine with a teacher who had once accompanied silent movies, and later studied with Professor of Flute at Brown, Blain Corey. She is currently Principal Flutist with the Cape Community Orchestra, Chatham Town Band, and teaches privately.

Fred Fried, guitar, has played with a diverse array of great musicians and singers. On Cape Cod his collaboration with saxophonist Bruce Abbott has become one of the more well-known jazz duos in New England.

Eastham bassist Michael Ryle studied with Edgar Meyer, Sr. at the University of Tennessee and began his professional career performing with orchestras in the greater Knoxville area and at the World’s Fair. He performs with the Cape Cod Symphony, freelancing jazz and chamber music and arranging and composing for big bands and his own group, Jazzical Cats.