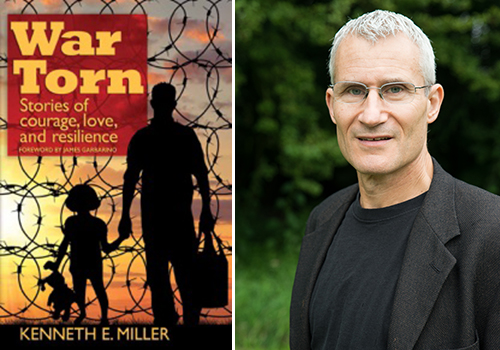 Join us for a book talk and book-signing event with Kenneth E. Miller, author of War Torn: Stories of Courage, Love, and Resilience. Kenneth E. Miller, a psychologist and an international expert on the impact of armed conflict on civilians, has been working with war-affected communities since 1991 as a researcher, clinician, and filmmaker. A professor of clinical and community psychology for much of his career, in 2015 he joined the Dutch NGO War Child Holland, and is currently based in Amsterdam. Ken is a regular contributor to Psychology Today and the Huffington Post, and is a frequent guest on national radio shows.

The courage and resilience on display in these eye-opening and heart-wrenching accounts is matched only by Miller’s brave and unflinching resolve to spend his life working in refugee camps and on the front lines, bearing witness to the individual horrors of armed conflict, while trying to help the victims heal, however imperfectly. With clarity of thought and prose, he also reminds us that “while people may be deeply wounded by the hardships they’ve endured, their spirits or psyches are seldom irreparably broken.”
-Diane Ackerman, author of The Zookeeper’s Wife

You could find no better guide than Ken Miller to illuminate this dark territory. A skilled storyteller, he has an eye for nuance that is often missing in our cultural conversation about PTSD. There is great suffering in the aftermath of unthinkable events but there is also bravery and courage that reveal what is best about humanity. I put down this book with a heart that was broken but also filled with hope.
-Ethan Watters, Author of Crazy Like Us and Co-founder, San Francisco Writers Grotto

In evocative and powerful prose, Ken Miller captures the remarkable human capacity for resilience in the face of great adversity. He also writes with compassion about the lasting damage that war has on the human heart and mind, when the limits of resilience have been surpassed.
–James Garbarino, Loyola University Chicago, author of No Place to be a Child: Growing up in a War Zone and Children and the Dark Side of Human Experience

War Torn is an exceptional, gripping account of the impact of war—a must-read for anyone interested in how war profoundly shapes people. This collection of personal experiences and mosaic of situations provides rich and unique insights into the complexities of war torn countries.
–Mark Jordans, King’s College London