Trump and the Law:  A Conversation with Steve Wasby 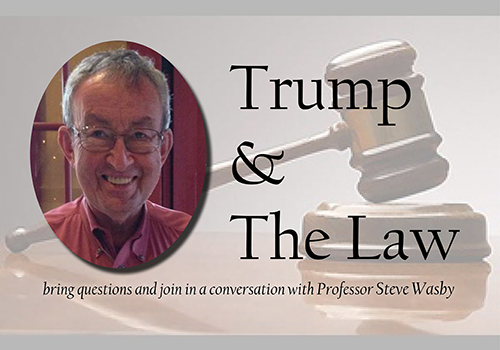 “Trump and the Law:  A Conversation with Steve Wasby”
We are pleased to host a conversation with Steve Wasby on “Trump and the Law.”  Trump is not the only president to have controversial interactions with the law, and there is a difference between politics and law.  Professor Wasby reminds us that it is important to distinguish between policies we might not like, such as rolling back environmental regulations, and actions that are legally questionable or even unconstitutional: they may overlap, but they are not identical. There are many instances of President Trump’s involvement with the law. Please bring questions and join the conversation!
Stephen L. Wasby, Ph.D., is emeritus professor of political science at the University of Albany-SUNY.  He is the author of several books, including the recently-published Borrowed Judges:  Visitors in the U.S. Courts of Appeals.