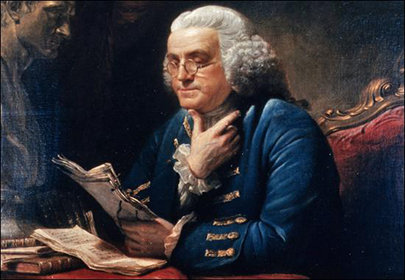 Find out how a runaway Boston apprentice became one of the most influential and famous men of his age. Historian Robert Allison will explore both the celebrated and lesser known aspects of founder Benjamin Franklin’s remarkable life on August 16 at 5 PM at the Truro Meeting House.  The talk, co-sponsored by the Truro Public Library and the Friends of the Truro Meeting House, will offer a preview of Allison’s new DVD for The Great Courses lecture series. You know that Franklin worked with electricity—did you know that John Adams did not like him?  But that both Cotton Mather and Voltaire did like him?  Or that he is the only Founder in a sports Hall of Fame?  That one of his essays was considered so vulgar he was kept out of the 19th Century Hall of Famous Americans?  Or that he is in the Chess Hall of Fame—and that the first book about chess published in Russian was Franklin’s essay on the game?  Allison will bring alive Franklin and his eventful life as few know it.

A professor of History at Suffolk University, Allison is president of the South Boston Historical Society, vice president of the Colonial Society of Massachusetts, and is a Trustee of the USS CONSTITUTION Museum.  His books include The American Revolution: A Very Short Introduction, A Short History of Cape Cod, A Short History of Boston, and Stephen Decatur: American Naval Hero. Great Courses previously released Allison’s lecture series, “Before 1776:  Life in the American Colonies,” available on DVD from The Teaching Company, Great Courses (2009), and is currently producing a Great Courses series on Benjamin Franklin.