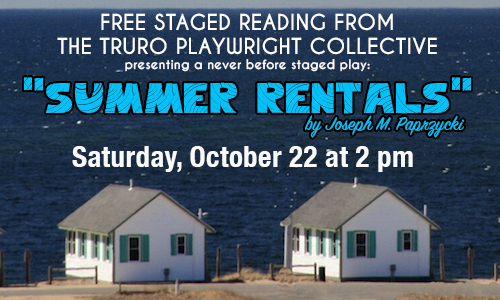 The Truro Playwright Collective presents this never before staged play: “Summer Rentals,” by Joseph M. Paprzycki. Taking place in two adjoining cottages on the water in North Truro in the summer of 2022, this play deals with a married gay couple, their young son and their long time friend. When it’s discovered that their son might be involved in a relationship with their middle aged friend, they must all deal with feelings of anger, confusion, betrayal and regret that could threaten the fabric of all of their relationships.

THIS WILL BE AN ONGOING SERIES HELD EACH MONTH! UPCOMING PLAYWRIGHTS WILL INCLUDE: Fermin Rojas, Will Hildreth, Linda Fiorella, Gary Garrison, Julia Salinger and John Dennis Anderson