Fearlessly and Ferociously: Journalism in the Era of “The Enemy of the People” 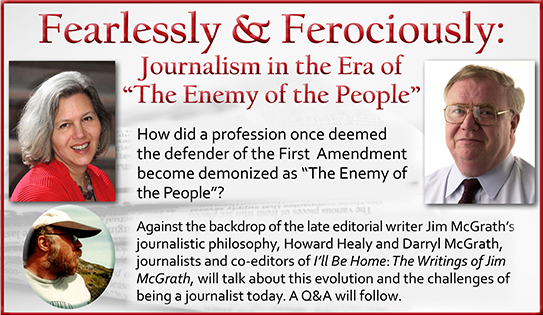 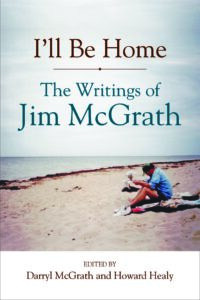 How did a profession once deemed the defender of the First Amendment become demonized as “The Enemy of the People”?

Against the backdrop of the late editorial writer Jim McGrath’s journalistic philosophy, Howard Healy and Darryl McGrath, journalists and co-editors of I’ll Be Home: The Writings of Jim McGrath, will talk about this evolution and the challenges of being a journalist today. A Q&A will follow.

Click here to register or call us for assistance.

Darryl McGrath is an Albany journalist who has written for the New York Times, the Chicago Tribune and several other newspapers. She was the Boston Globe’s Upstate New York correspondent from 2001 to 2005, and she taught journalism and writing at the State University of New York in Albany for a dozen years. She is the author of Flight Paths: A Field Journal of Hope, Heartbreak, and Miracles with New York’s Bird People, published by SUNY Press in 2016.

Howard Healy retired in 2008 as the editorial page editor of the Albany Times Union, where he won several statewide and national awards for distinguished commentary. A native of Troy, New York, he returned to New York’s Capital Region more than 20 years ago after a newspaper career that included the Courier-Journal in Louisville, Ky., and the Wall Street Journal’s Washington, D.C., bureau, where he was part of a team that edited that newspaper’s coverage of the Watergate scandal. He is a copyeditor and proofreader for the New York State Bar Association.