Citizenship in the 21st Century 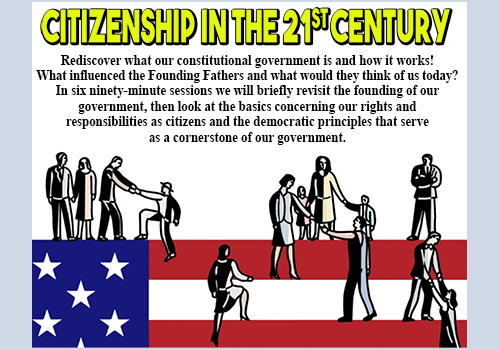 This program is now “live”! There is limited space for 8 participants and meets on the second and fourth Thursdays in March, April, and May. Please call 508-487-1125 to register.

Rediscover through civil conversation just what our constitutional federal republic government is and how it works! What influenced the Founding Fathers, and what would they think of us today? In six, ninety-minute sessions, we will briefly revisit the founding of our government, then take a longer look at the basics concerning our rights and responsibilities as citizens and at the democratic principles that serve as a cornerstone of our government. There will be some short readings with discussion and some guest speakers depending on their availability.

This series will be led by David McGlothlin, a 33 year veteran Social Studies teacher with Provincetown IB Schools. He currently teaches Individuals and Societies (Ancient Civilizations 1 and 2 and Civics to grades 6, 7 and 8). David taught for 17 years at Osbourn HS in Manassas, VA prior to moving to Provincetown to own and operate Christopher’s by the Bay B&B and teach at Provincetown School. In 2015 he was recognized as the Massachusetts History Teacher of the Year by the Gilder Lehrman Foundation and the Massachusetts Department of Elementary and Secondary Education. David recently sold his B&B and is enjoying some down time in addition to teaching.