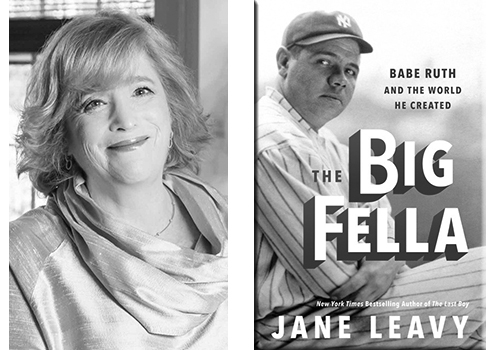 Author Jane Leavy on:
The Big Fella: Babe Ruth and the World He Created
Join us for a talk by Jane Leavy on baseball legend Babe Ruth. He lived in the present tense—in the camera’s lens. There was no frame he couldn’t or wouldn’t fill. He swung the heaviest bat, earned the most money, and incurred the biggest fines. Like all the new-fangled gadgets then flooding the marketplace—radios, automatic clothes washers, Brownie cameras, microphones and loudspeakers—Babe Ruth “made impossible events happen.” Aided by his crucial partnership with Christy Walsh—business manager, spin doctor, damage control wizard, and surrogate father, all stuffed into one tightly buttoned double-breasted suit—Ruth drafted the blueprint for modern athletic stardom. Drawing from more than 250 interviews, a trove of previously untapped documents, and Ruth family records, Leavy breaks through the mythology that has obscured the legend and delivers the man.

Jane Leavy is the author of the New York Times bestseller Sandy Koufax: A Lefty’s Legacy and the comic novel Squeeze Play, which Entertainment Weekly called “the best novel ever written about baseball.” She was a staff writer at The Washington Post from 1979 to1988, first in the sports section, then writing for the style section. She covered baseball, tennis, and the Olympics for the paper. She wrote features for the style section about sports, politics, and pop culture, including, most memorably, a profile of Mugsy Bogues, the 5’3″ guard for the Washington Wizards, which was longer than he is tall.  Before joining the The Washington Post, she was a staff writer at womenSports and Self magazines. She has written for many publications, including The New York Times, Newsweek, Sports Illustrated, The Village Voice, and The New York Daily News. Leavy’s work has been anthologized in many collections, including Best Sportswriting; Coach: 25 Writers Reflect on People Who Made a Difference; Child of Mine: Essays on Becoming a Mother; Nike Is a Goddess: The History of Women in Sports; Diamonds Are a Girl’s Best Friend: Women Writers on Baseball; A Kind of Grace: A Treasury of Sportswriting by Women; and Making Words Dance: Reflections on Red Smith, Journalism and Writing. She grew up on Long Island where she pitched briefly and poorly for the Blue Jays of the Roslyn Long Island Little League. On her parents’ first date, her father, a water boy for the 1927 New York football Giants, took her mother to a Brooklyn College football game. She retaliated by taking him to Loehmann’s after the final whistle. It was a template for their 63-year union. As a child, Jane Leavy worshipped Mickey Mantle from the second-floor ballroom in the Concourse Plaza Hotel where her grandmother’s synagogue held services on the High Holidays. Jane Leavy attended Barnard College and the Columbia University Graduate School of Journalism, where she wrote her master’s essay (later published in The Village Voice) on Red Smith, the late sports columnist for The New York Times, who was her other childhood hero. She has two adult children, Nick and Emma Isakoff, and she lives in Washington, DC, and Truro, Massachusetts.