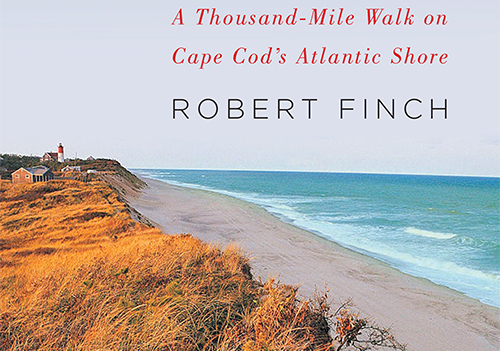 Two years after treating us to the work in-progress, Robert Finch returns to read from The Outer Beach: A Thousand-Mile Walk on Cape Cod’s Atlantic Shore. Mr. Finch writes of the Outer Beach, “No other place I know sears the heart with such a constant juxtaposition of pleasure and pain, of beauty being born and destroyed in the same moment.”  He will share a sampling from the book’s “mosaic” of pieces, chronicling his inaugural awe and jubilance at meeting the ocean in 1962 through his still awe-inspiring but now-familiar treks on the shore in the 2010s, where there is always something new on the wrack-line—and in our reaction to it. Open-minded on each foray, Mr. Finch lets his subject be center-stage. His voice is as confident and unassuming in person as it is on the radio, and on the page; he will take questions after the reading.

Widely regarded as one of America’s leading nature writers, Robert Finch has lived on Cape Cod since 1971. He has published seven books of essays and is co-editor of The Norton Book of Nature Writing. His weekly radio commentary, “A Cape Cod Notebook,” for which he has twice received the prestigious Edward R. Murrow Award for Radio Writing, has been broadcast on WCAI since 2005. His essays have appeared in numerous magazines and journals and his books have been translated into Japanese and Chinese. For his body of work he was named as one of the New England Literary Lights for 1999 by the Associates of the Boston Public Library, and in 2001 he received the Non-Fiction Award from the New England Booksellers Association.  Mr. Finch has taught at numerous colleges and writers conferences, including Williams College, Emerson College, Carleton College, Penn State, the Provincetown Fine Arts Work Center and the Bread Loaf Writers Conference. From 2002-2012, Mr. Finch was on the nonfiction faculty of the MFA in Writing Program at Spalding University, Louisville, Kentucky.  He lives in Wellfleet.