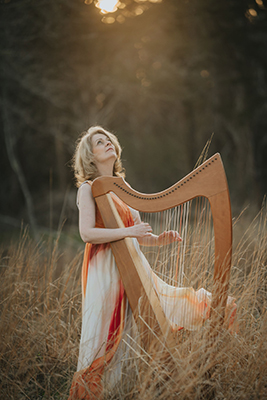 The Friends of the Truro Library help you through St. Patrick’s Day withdrawal with a special treat—a concert by acclaimed Celtic harpist, vocalist, composer, and arranger Áine Minogue. With voice and harp, Áine shares with her audiences a keen appreciation of her culture and the many ways it touches us.

“…Áine pushes her art to the edge of her music. She embraces a traditional core and re approaches it, wrapping it in new and exciting clothing. She’s a terrific musician, with an uncanny ability to connect with her audience.”
BRIAN O’DONOVAN
WGBH RADIO, BOSTON

This Irish harpist combines a hypnotic Celtic spirituality and contemporary sophistication in her playing and delicately lovely singing.
BOSTON GLOBE

Born and raised in Borrisokane, County Tipperary, Ireland, Áine Minogue is an award-winning harpist, singer, arranger and composer who has entertained Presidents and Prime Ministers, as well as traveled extensively to perform at concerts across the United States and around the world.

At the age of 12, while at boarding school in County Galway, Áine discovered her true love – the harp. After completing school, she spent three years developing her incomparable talent as a harpist at Bunratty Castle, one of Ireland’s most treasured landmarks and the perfect setting to accentuate the harp’s emotional and lyrical connections to Irish history.

With a dozen solo album recordings to her credit, Áine has been nominated for several awards for her work as a record producer. Her recordings include Were You at the Rock, To Warm the Winter’s Night, The Mysts of Time, Between the Worlds, Circle of the Sun, The Twilight Realm, Celtic Meditation Music, Celtic Pilgrimage, Celtic Lamentations, and Close Your Eyes, Love. She also has collaborated on a series of music videos with filmmaker Michael Yip entitled Winter, A Celtic Meditation.

Áine’s music, in varying styles including Celtic, World, Folk, Spiritual and New Age, has appeared on compilations for industry labels such as BMG, Decca, Universal, Virgin Records, Windham Hill and Putumayo. Many of these albums have topped Billboard Magazine’s World, New Age and Classical Charts for months at a time. In addition, she has completed extensive soundtrack work for PBS, NBC, CBS, ABC, FOX, and MTV.

She has a Master’s Degree in Traditional Irish Harp Performance from the University of Limerick, Ireland. Her music is on Pandora, Spotify, iTunes, and Amazon. You can follow Áine on Facebook, Twitter and Instagram.