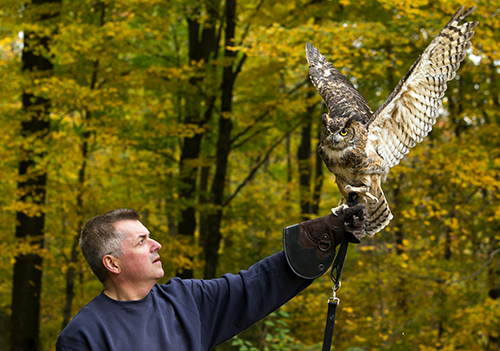 Join us for an informative program about birds of prey, also known as raptors—hunting birds characterized by hooked beaks and powerful grabbing feet armed with sharp talons.  Learn about several categories of raptors, including hawks, falcons, and owls, and meet six live birds of prey. What is predation?  Why are these birds at the top of the food web?  How are they adapted to be stellar hunters, and what is their status in a rapidly changing world?  This presentation includes one or more endangered species cared for by Wingmasters, and we will learn why these species face an uncertain future.

WINGMASTERS is a partnership of two people dedicated to increasing public understanding and appreciation of North American birds of prey. Julie Anne Collier and Jim Parks are both licensed raptor rehabilitators based in Massachusetts. Together they care for injured birds of prey at their center in Leverett, Massachusetts.  Most of the birds they rehabilitate can ultimately be released back into the wild, but in some cases the birds are left permanently handicapped. Julie and Jim are further licensed to provide a home for these non-releasable raptors, and to use them for educational programs. Since 1994 WINGMASTERS has presented over 10,000 programs at schools, libraries and museums throughout New England.