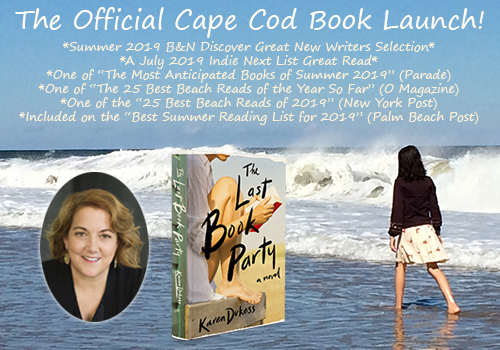 We are delighted to host the official Cape Cod launch of The Last Book Party with author Karen Dukess, in conversation with author Suzy Becker (Everything I Need to Know I Learned From My Cat, I Had Brain Surgery, What’s Your Excuse and many other books for children and adults). A propulsive tale of ambition and romance, The Last Book Party is set in the publishing world of 1980s New York and the timeless beaches of Truro.

In the summer of 1987, 25-year-old Eve Rosen is an aspiring writer languishing in a low-level assistant job, unable to shake the shadow of her brilliant brother. With her professional ambitions floundering, Eve jumps at the chance to attend an early summer gathering at the Truro home of famed New Yorker writer Henry Grey and his poet wife, Tillie. Dazzled by the guests and her burgeoning crush on the hosts’ artistic son, Eve lands a new job as Henry Grey’s research assistant and an invitation to Henry and Tillie’s exclusive and famed “Book Party”— where attendees dress as literary characters. But by the night of the party, Eve discovers uncomfortable truths about her summer entanglements and understands that the literary world she so desperately wanted to be a part of is not at all what it seems. A page-turning, coming-of-age story, written with a lyrical sense of place and a profound appreciation for the sustaining power of books, Karen Dukess The Last Book Party shows what happens when youth and experience collide—and what it takes to find your own voice.

The Last Book Party was selected for Barnes and Noble’s Discover Great New Writers Summer 2019.
Karen Dukess has a work history as eclectic as her taste in books. She has been a tour guide in the former Soviet Union, a newspaper reporter in Florida, a magazine publisher in Russia and, for nearly a decade, a speechwriter on gender equality for the United Nations Development Programme. She has blogged on raising boys for The Huffington Post and written book reviews forUSA Today. She has a degree in Russian Studies from Brown University and a Master’s in Journalism from Columbia University. She lives with her family near New York City and spends as much time as possible in Truro on Cape Cod.